The most dangerous advice you can give a child is “Go to school, get good grades, and look for a safe, secure job.” —Robert T. Kiyosaki, author Rich Dad, Poor Dad

I don’t normally write about the same book twice, but I received so many complaint letters about my attack on Rich Dad, Poor Dad last month that a follow-up is necessary. “I was stunned by your review,” wrote one subscriber. “My impression is very different from yours. Robert Kiyosaki comes off as someone who loves life and still has time for his two young boys fascinated by the world of business. Robert says it is the Rich Dad that has time for him, not the Poor Dad who is too busy climbing the job ladder and the rat race. Robert notes that in today’s volatile world there is no financial security—not by employers or government. You have to fill the void yourself through financial education and business entrepreneurship.”

My response: I have a mixed attitude about the philosophy behind Rich Dad, Poor Dad. In many places, he makes a lot of sense. I agree 100% that too many good people earn too little, spend too much and use their credit cards excessively, causing undue financial hardship and unpaid bills. I agree 100% that not enough time is spent in school educating young people on the virtues of self-discipline, budgeting, thrift, business acumen and entrepreneurship. I agree 100% that too many Americans have adopted a “bash the rich” and an “entitlement” mentality, believing that their company or government owes them a guaranteed life of benefits and security.

Kiyosaki favors the Rich Dad who sets his own hours and takes his chances in construction, chain stores and restaurants while he dabbles in real estate and penny stocks. He opposes the Poor Dad whose advice is, “Go to school, get good grades and look for a safe secure job.” He calls it “the most dangerous advice you can give a child” because in today’s global world, there’s no such thing as a safe, secure job. “That may be, but it doesn’t mean that you can’t work for several companies during your lifetime. Going out on your own as a capitalist/entrepreneur isn’t your only choice, and frankly, for most people it may not be the best choice.

Not everyone is cut out to be a capitalist/entrepreneur willing to go out on their own and invest in high-risk ventures. Most people prefer to work for a company. That’s fine—there’s no reason to be guilty about being an employee or executive of a big corporation. My advice is to work hard at that job, get up-to-date training, earn those raises, stay out of debt—and save and invest as much as possible. Many of my subscribers fit in this category.

Kiyosaki belittles his real father who had advanced degrees from Stanford and the University of Chicago but never could make ends meet as a school administrator in Hawaii. He was the Poor Dad who had little interest in “making money.” But Kiyosaki’s criticisms are misplaced. His dad’s troubles were not due to his non-pecuniary interests or in his working for the state of Hawaii. Poor Dad simply didn’t live by George Clason’s basic rules of The Richest Man in Babylon: Always save at least 10%, no matter how much you earn. That way you get richer every year, no matter what your lifestyle. Poor Dad could have been Rich Dad without taking any big risk in high-flying businesses or penny stocks. He could simply invest his 10% in index funds or even money market funds.

Who Gets Caught Up in the Rat Race?

I had to laugh when Kiyosaki accused his Poor Dad of getting caught up in the “rat race” of life with bigger homes and higher credit card bills. Believe me, the Rich Dad is also involved in the rat race. When you start your own business, that’s all you can think about. You will work 14 hours a day or more. Time for the kids and spouse? Forget it! Sure, you may show up to see your son play Little League, but more than likely you’ll be on your cell phone talking business. It’s the nature of the beast.

One final comment. Kiyosaki boastfully declares, “The real reality is that rich are not taxed.” They use corporations and other tax breaks to beat the taxman. “It’s the middle class who pays.” That may have been the case a few years back, but not anymore. The rich are paying through the nose these days. Today the top 1% are paying over 30% of the federal income taxes. I know-I’m one of them. Sure, you may reduce your tax burden through corporations, but it’s harder and harder to escape taxes entirely.

In sum: Kiyosaki’s books are fine for self-employed risk-takers (and I’m one of them!). But for those who like working for others, don’t panic. You, too, can be a Rich Dad by following George Clason’s prudent formula, “A part of all you earn is yours to keep.” 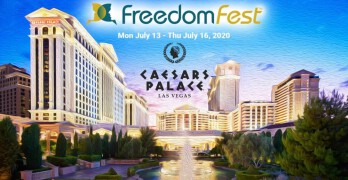 By Mark Skousen Chapman University [email protected] “Today, as in the … END_OF_DOCUMENT_TOKEN_TO_BE_REPLACED

I’m mentioned on page 22 for my gross output (GO) model. (Sorry, I may be worth … END_OF_DOCUMENT_TOKEN_TO_BE_REPLACED

BY MARK SKOUSEN Presidential Fellow, Chapman University "If I have seen a … END_OF_DOCUMENT_TOKEN_TO_BE_REPLACED

The November 24th issue of The Economist, page 73, is running a new full-page … END_OF_DOCUMENT_TOKEN_TO_BE_REPLACED

‘Gross output’ reflects the full value of the supply chain, and it portends much … END_OF_DOCUMENT_TOKEN_TO_BE_REPLACED

In addition to all the great debates, presentation and hundreds of vendors in … END_OF_DOCUMENT_TOKEN_TO_BE_REPLACED

This is a significant breakthrough, which I have encouraged them to do for some … END_OF_DOCUMENT_TOKEN_TO_BE_REPLACED

March 9, 2016: Today marks the 240th anniversary of the publication of “The … END_OF_DOCUMENT_TOKEN_TO_BE_REPLACED