“Stimulating independent thought… is being done by all too few individuals and institutions, not only in the U.K. but here in the U.S. as well.” — Milton Friedman (1981)

Donating money to a few of my favorite free-market organizations used to be a pleasant duty, but now I’m literally inundated with demands from hundreds of think tanks and public-policy groups, all vying for my limited funds. Maybe you’re wondering if we really need so many foundations and political organizations.

Back in 1946, there was only one free-market organization in the United States: the Foundation for Economic Education, run by Leonard Read. If you were a classical liberal, you wrote for The Freeman (now Ideas for Liberty) and contributed to FEE. (I write a regular column called “Economics on Trial”; to subscribe, call 800/452-3518, only $35 a year! Or see their web site, www.fee.org) But then along came a British chicken farmer, Sir Anthony Fisher (1915-1988), who established the Institute of Economic Affairs in London. Tony was so enamored with the idea of setting up free-market foundations that he created an organization for the very purpose of creating more institutes around the world: The Atlas Economic Research Foundation, based in Fairfax, Virginia.

Over 350 Institutes in over 50 Countries

By going to their web site, www.atlas-fdn.org, you’ll discover its virtual directory, which contains the web site links of hundreds of public-policy institutes in 50 countries. Of course, the big names are there, such as Heritage, Cato and the American Enterprise Institute. But you’ll also find dozens of smaller, lesser-known groups in Europe, Asia and Latin America.

Think tanks sometimes have an objective name, like the Independent Institute or the National Center for Policy Analysis, while others are purposeful and include in their title terms like reason, liberty, sound economy or free enterprise. Others are named after a location like Manhattan or Mont Pelerin. Many are linked to famous classical liberal philosophers like Adam Smith, Ludwig von Mises, Friedrich Hayek, Henry Hazlitt, James Madison, Alexis de Tocqueville, Lord Acton and Edmund Burke.

The Atlas Foundation doesn’t think there are enough think tanks. It has a section of its web site devoted to showing you how to set up your own institute. In “The Need for More Institutes,” Atlas quotes Milton Friedman (see above). I noticed several free-market think tanks devoted to environmental issues. None of them are very big. Maybe if they combined forces, they could offer a countervailing power” to the Sierra Club or Earth First.

The Growth of State Think Tanks

There are two strong arguments favoring an ever-growing number of educational foundations and public-policy think tanks. First, the wider number of institutes, the greater the ability to specialize and fulfill the needs of reformers. Adam Smith made this point in The Wealth of Nations. An expanding market permits greater specialization and higher consumer satisfaction.

For example, state and local organizations can deal with local issues. Recently a proliferation of state think tanks have attracted substantial sums and made valuable contributions: The Mackinac Center in Michigan, the James Madison Institute in Florida, the Sutherland Institute in Utah, the Cascade Policy Institute in Oregon. Clearly, these organizations are making fresh contributions and avoiding duplication.

Second, increased competition not only means more specialized demands are being met, but the total amount of contributions to free-market causes is maximized.

What is the optimal number of think tanks? The market test is the ultimate decision-maker: whatever the market will bear. Apparently the optimal level has not been reached. When I asked Mary Thoreau of the Independent Institute, “Are there too many think tanks?” her reply was succinct: “Is the world free? Is competition bad?”

By Mark Skousen Chapman University [email protected] “Today, as in the … END_OF_DOCUMENT_TOKEN_TO_BE_REPLACED

I’m mentioned on page 22 for my gross output (GO) model. (Sorry, I may be worth … END_OF_DOCUMENT_TOKEN_TO_BE_REPLACED

BY MARK SKOUSEN Presidential Fellow, Chapman University "If I have seen a … END_OF_DOCUMENT_TOKEN_TO_BE_REPLACED

The November 24th issue of The Economist, page 73, is running a new full-page … END_OF_DOCUMENT_TOKEN_TO_BE_REPLACED

‘Gross output’ reflects the full value of the supply chain, and it portends much … END_OF_DOCUMENT_TOKEN_TO_BE_REPLACED

In addition to all the great debates, presentation and hundreds of vendors in … END_OF_DOCUMENT_TOKEN_TO_BE_REPLACED

This is a significant breakthrough, which I have encouraged them to do for some … END_OF_DOCUMENT_TOKEN_TO_BE_REPLACED

March 9, 2016: Today marks the 240th anniversary of the publication of “The … END_OF_DOCUMENT_TOKEN_TO_BE_REPLACED 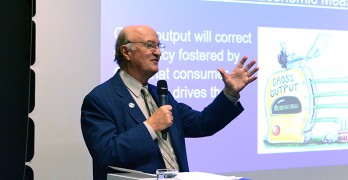