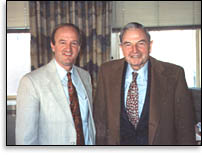 The purpose of my two-hour, one-on-one interview with David Rockefeller, the former chairman of Chase Manhattan Bank and the youngest grandson of oil magnate, John D. Rockefeller, Jr., was to learn his assessment of the new global free market economy of the 1990s and beyond.

First, Rockefeller said that despite his top-level connections, he had not anticipated the fall of the Berlin Wall and the collapse of the Soviet Union.

He also expressed deep concern about the banking crisis, which he says is spreading worldwide. “The Japanese banks are not having an easy time as they once had.”

Finally, in his most surprising statement, he revealed he considers himself a follower of the Austrian school of economics. Friedrich Hayek had been his tutor at the London School of Economics in the 1930s.

A plaque at Rockefeller Plaza displays some of David Rockefeller’s grandfather’s beliefs:

“I believe that government is the servant of the people and not their master…that the world owes no man a living, but that it owes every man an opportunity to make a living…that thrift is essential to well-ordered living and that economy is a prime requisite of a sound financial structure, whether in government, business or personal affairs…that character — not wealth or power or position — is of supreme worth…that right can and will triumph over might.”

Leave a Reply to Daily Bell review: on banking, the nature of money, and dubious affiliations « The Daily Knell Cancel reply

By Mark Skousen Chapman University [email protected] “Today, as in the … END_OF_DOCUMENT_TOKEN_TO_BE_REPLACED

I’m mentioned on page 22 for my gross output (GO) model. (Sorry, I may be worth … END_OF_DOCUMENT_TOKEN_TO_BE_REPLACED

BY MARK SKOUSEN Presidential Fellow, Chapman University "If I have seen a … END_OF_DOCUMENT_TOKEN_TO_BE_REPLACED

The November 24th issue of The Economist, page 73, is running a new full-page … END_OF_DOCUMENT_TOKEN_TO_BE_REPLACED

‘Gross output’ reflects the full value of the supply chain, and it portends much … END_OF_DOCUMENT_TOKEN_TO_BE_REPLACED

In addition to all the great debates, presentation and hundreds of vendors in … END_OF_DOCUMENT_TOKEN_TO_BE_REPLACED

This is a significant breakthrough, which I have encouraged them to do for some … END_OF_DOCUMENT_TOKEN_TO_BE_REPLACED

March 9, 2016: Today marks the 240th anniversary of the publication of “The … END_OF_DOCUMENT_TOKEN_TO_BE_REPLACED